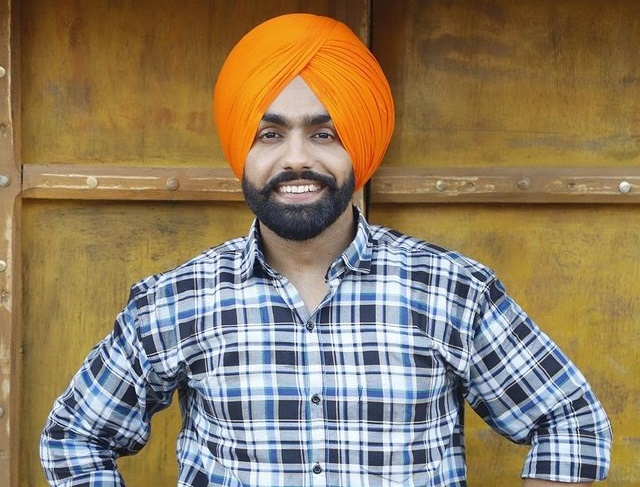 Ammy Virk is an Indian Singer, Actor, and Producer who works in Punjabi and Hindi films. He is known for his ‘Patiala Shahi Turban.’ He is best known for playing the role of Nikka in the Nikka Zalidar series, Shivjit in Qismat, Harjeet Singh in Harjeeta, and Haakam in Angrej. He started the production house Villagers Film Studio and a distribution company InHouse Group.

Ammy started his singing career in 2012 by releasing the song “Chandigarh Diyan Kudiyan.” After that, he shot to fame by singing “Yaar Amli” and “Jatt Da Sahara.” In 2013, he released his first music album, “Jattizm,” which earned him his PTC Music Award of “Best Album of the Year.” Subsequently, he released many hit songs, including “Zindabaad Yaarian,” “Surma To Sandals,” “Qismat,” “Time Boliyan,” and “Haath Chume.”

Ammy made his acting debut in the Punjabi Industry in 2015 by playing the role of ‘Haakam’ in the film ‘Angrej.’ Next, he appeared in the movie “Ardass” and “Bambukat.” Subsequently, he featured in many popular films like “Nikka Zalidar,” “Sat Shri Akaal England,” “Harjeeta” and “Qismat.”

In addition to acting and singing, he owns a production house named “Villagers Film Studios” and a distribution company “In House Group.” In 2019, he roped in to play the role of pacer Balwinder Singh Sandhu in the Bollywood Film “83,” based on the Indian Cricket Team’s 1983 World Cup Victory.

His hobbies include bike riding, sleeping, and reading. His family has its roots in Pakistan. He is very fond of dogs. Chhole kulche, Sarson Da Saag and makki roti is his mouth-watering dish.