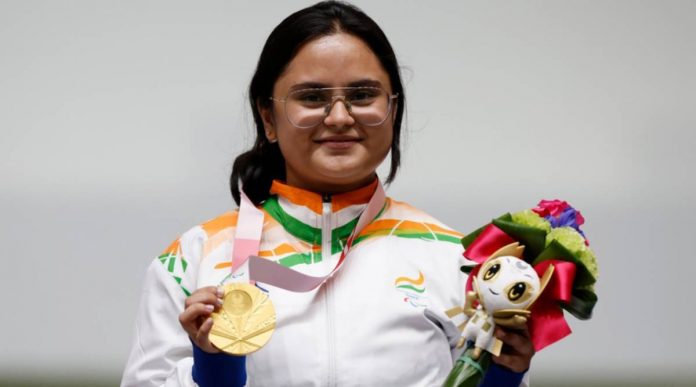 The First Woman to win India’s first gold medal at the Tokyo 2020 Summer Paralympic, Avani Lekhara, with 249.6 points in the final event, the young shooter set a Paralympic and tied the world record. She won a gold medal in a 10m air rifle standing and a 50m air rifle standing at Tokyo 2020 Summer Paralympic. Avani Lekhara is currently World No 5 in Women’s Air Rifle Standing. She is the first Indian woman to win multiple medals in Single Paralympic Games.

In 2012, she met with a car accident when she was 11 years old. This accident left her with complete paraplegia, a spinal cord injury that paralyzes the lower limbs. Later, her father motivated her to join sports. Initially, she got trained in archery. However, she found her true passion in shooting and eventually followed it.

In 2015, she started shooting at Jagatpura, Sports Complex in Jaipur, India. She got the inspiration to choose shooting as a sport from the former Olympic Champion Abhinav Bindra.

Since 2015, she has won several medals in national and international shooting events till now.

On 30 August 2021, Prime Minister Narendra Modi congratulated Avani Lekhara on Twitter after winning a gold medal for India in the 2020 Tokyo Paralympics. She dedicated her award to the whole country that she clinched at the 2020 Tokyo Paralympics. While talking to India Today’s correspondent after winning the gold medal, she said- “This medal is not mine; it’s for the entire country. So, I want to dedicate this medal to the entire country.”